One trend I've noticed, over the last year or more, is for writers with long track records in traditional publishing (often known as legacy publishing, or print publishing) to sound off about the firms they once did business with. Sometimes they speak in the bluntest terms about how they were treated, cheated, let down, and otherwise buggered about.

I offer a couple of recent examples. Joe Konrath, in an afterword to Melinda DuChamp's guest blog, lays down the law in no uncertain terms. Here's a man with goodness knows how many print books to his name who is never, under any circumstances, going to be tempted to go back into slavery.

'I don't need legacy publishing,' he writes, 'and I will never be taken advantage of again. I declare myself independent of the entire archaic, broken, corrupt system.' Which is plain enough for anyone.

One more example. Kristine Kathryn Rusch is another experienced writer who regularly has less than complimentary things to say about contract terms, often quoting examples from her own period of servitude (although she also gives credit where credit is due). Her general conclusion is that traditional publishers have gone crazy.

It seems that, the longer the writers' track record, the more likely they are to favour going indie. 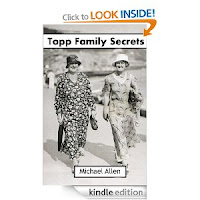 Readers, meanwhile, are busy buying books (or picking up free ones via the Kindle Select system -- see, currently, Topp Family Secrets). Digital Book World has taken to publishing ebook bestseller lists which analyse the data (according to a not entirely transparent methodology) into various price bands. This is interesting, not least because it suggests that the big publishers are still able to sell at least some ebooks at high prices.

Whether they are maximising their income through an intelligent use of pricing is, however, another matter entirely. As far as I am concerned, their pricing policy seems to be more or less crazy (same conclusion as Ms Rusch). For example, a few weeks ago the Sunday Times carried a review of a new book by a favourite of mine, Alan Furst. The ebook price quoted was, I thought, £19.99, but that may have been a misprint or I may have misread it. Either way, when I came to check it on Amazon, it was £9.99, which is quite stupid enough.

£9.99 translates as $15.68 (as of today), which is way above any book on DBW's latest $10 and up bestseller list (apart from bundles of books). At £2 or maybe even £4 this would have been an instant buy for me. But £9.99? You have to be fucking joking. This is a novel -- an entertainment, albeit an unusually intelligent one. It's not a cure for cancer. And pricing an ebook at that level is not a strategy for staying in business.
Posted by Michael Allen at 5:03 pm

"DBW lets us look at ebook bestsellers by price, and things are revealed":

On the other hand, there are a large number of counter-examples of authors who continue to publish the traditional way. And readers who appreciate the filtering that publishers and editors provide.

On the economics of e-books, it is a fallacy that it is cheap to produce an e-book, though publishers do save on distribution costs and booksellers on storage costs. And, e-books (and audio books) are subject to VAT in the UK, which print books are not - a substantial fraction of the price which someone in the supply/reader chain has to pay.

I'm so glad you raised this topic. Whilst I am a willing participant in today's epublishing business world, I cannot perceive ANY ebook priced over (as you say) £4 as value for money. Call me old fashioned, but at that price point I switch off and purchase the paper format. Why does this matter? Because my buying decision is made before I purchase, whereas, if an ebook is cheap enough ( a pound or two) I will take a punt. Marketeers should take note. After all, they've gone through highly expensive degree programmes to become qualified, and they should be able to work out such things for themselves.