Boldness be My Friend

It's funny how some books survive while some disappear after six months. This afternoon, for instance, I was walking past a charity shop when I saw in the window a copy of a book that I read nearly sixty years ago. And yet there it was, in a modern paperback edition. 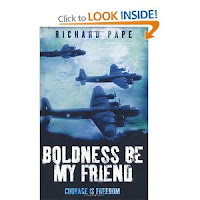 When I got home I looked it up on Amazon. The title is Boldness be My Friend, and it's by Richard Pape. First published by Elek Books in 1953, apparently, and now available in a 2008 edition from Headline Review. The printer is Antony Rowe, which means that they've done it as a POD edition, and very wise too. I notice that the original copyright notice was in the name of Helen Pape, so perhaps his wife wrote the book on behalf of the nominal author.

Boldness be My Friend was one of the many wartime memoirs of ex-servicemen which were published within about ten years after the end of hostilities in 1945. The most famous of these memoirs was, perhaps, The Wooden Horse, by Eric Williams. First published in February 1948, it was reprinted nine times in the next four months. A huge seller; and it was soon filmed (1950), the film too being a big success. Collins were the original publisher, and Leo Cooper (Jilly's husband) revived it in 2005. 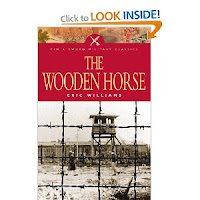 Both these books were about prisoners of war, held by the Germans, who somehow or other managed to escape from their prison camps and made their way back to England. Or tried to. That was their appeal. Captured these men might have been, but they never gave up fighting. That sort of thing. And the appeal, it seems, still lingers. Courage in the face of adversity. Don't underestimate it.

Posted by Michael Allen at 7:34 pm