This has got nothing to do with books, but if you're interested in windows here's as impressive a collection as I've seen in a long time. It just seems to go on and on and on.

Oh, and there's one of my pics in there somewhere, which is how I found out about it.

More of mine on Flickr. Haven't done anything in that line recently. Fifteen months ago I bought a big iMac specially for photography and, naturally, have done nothing since.
Posted by Michael Allen at 10:28 am 3 comments:

Fifty Shades of Grey? We have been here before...

Here in the UK, sales of Fifty Shades of Grey have begun to tail off. A bit. Two weeks ago, Grey sold 1.4 million. In a week. But last week purchases of the so-called mommy-porn (or mummy-porn) novel were down. Even so, the book still managed to sell 534,000 copies. Next biggest seller was Kathy Reichs, whose Flesh and Bones sold 23,871. (Figures from The Bookseller, as reported by the BBC.)

Well now, let's have a little think about this.

What we have here, apparently, is a novel which features a highly submissive woman and a dominant man. (I say apparently because you'd never know much about it from the Kindle sales page on Amazon.co.uk. The publisher provides absolutely zero info about the content.) However, going by vague bits and pieces that I've picked up over the past few months, the plot is, basically, that our heroine is into being tied up and beaten and stuff. So it's a kinky, pervy, ooh-missis kind of story (think what Frankie Howerd would have made of it); and it's all stretched out over three volumes.

Well, the best of luck to all who sail in her. I don't begrudge anybody connected with Grey a single penny of their profits. And if I sound a little snobby about the E.L. James trilogy, believe me it's not because I am anti-porn. Far from it. I have, in my time, researched widely in the field of Victorian erotica, and I have fond memories of such classics as Lady Bumticklers Revels. Furthermore, I would buy Ms James's three books instantly if I thought they would put lead in my elderly pencil. But it doesn't seem likely that they would. On Amazon.co.uk, the first book in the series has 2593 reviews, and 835 of them give it one star. With such encouraging headings as 'Absolute, unashamed, utter drivel'.

What I really want to draw your attention to, because many of today's readers are far too young to remember, is that we have witnessed (some of us) this kind of event before. And, I would venture, we've seen it done rather better.

In the early 1950s there was a French woman who was having an affair with a married man, Jean Paulhan. M. Paulhan's mistress was christened, it seems, Anne Desclos, but in her early thirties she became known as Dominique Aury. As Aury herself acknowledged about the affair with Paulhan, she was no longer young (47) and she was not pretty, so she had to find some other means of binding him to her. The solution was found when her lover expressed an admiration for the work of the Marquis de Sade, and said that no woman could possibly write like that. So Dominique Aury wrote a novel which would test the truth of that proposition.

Dominique Aury's lover was sufficiently intrigued by this novel to arrange for it to be published in 1954. The author chose the pen-name Pauline Reage, and worked hard to maintain her anonymity.

From the beginning, the novel attracted much attention. Various attempts were made to ban it; it won the Prix des Deux Magots; Susan Sontag (inevitably) had things to say about it, and so on and so forth. Over the years it was translated into more than twenty languages, became a bestseller in several countries, and sold millions of copies.

In real life, Dominique Aury was a respected figure on the French literary scene, and her authorship of the notorious Histoire d'O was known only to a few. She was a member of the Legion d'Honneur, i.e. highly respectable. Her anonymity was maintained largely by the fact that all sorts of respectable Frenchmen and women were quite happy to have it 'known' that actually they had written her novel themselves.

And fifty years after its first publication, the French government announced that Histoire d'O would be included on a list of 'national triumphs' to be celebrated that year.

I once had a copy of Story of O, and tried diligently to read it. But failed.

If you want to know more about this extraordinary author, start with Wikipedia. And there's a good chapter in Nom de Plume by Carmela Ciuraru (2011, HarperCollins).

PS. Tim Worstall reminds me that Tom Sharpe wrote a satirical novel about publishing, The Great Pursuit, in which a dodgy firm of literary agents hires a young man to pretend to be the author of a rather racy novel. Well, I say satirical. All too easy to believe, actually. And of course it happens all the time with celebrity authors.
Posted by Michael Allen at 10:19 am 3 comments:

Bruce Holland Rogers is a short-story writer with formidable talent, and I have written about him on this blog before: principally here and here.

He is now using Kickstarter to try to raise $3000 for a trade paperback version of his latest collection. Seems like a good idea to me. Here's the Kickstarter page.

If you want to read a story that I, at least, found very powerful, try The Dead Boy at Your Window. And there are links to several other freebies on Bruce's own web site.
Posted by Michael Allen at 7:31 pm No comments:

I'm sitting here, still in jimjams at noon, about one week into a nasty chest infection, and without the energy to do much -- not even look at naughty pictures on the internet, so that shows how bad it is. Anyway, couldn't let this one pass.

This morning I got a notification from Blogger about a comment on an old post, so I went to the post and deleted the comment. But while I was there I noticed that the post mentioned a new man, recently appointed as the boss of Borders bookshops chain in the US.

At that time Borders was in poor shape, shares at a three-year low. But fear not. The boy genius, one George Jones by name, had ideas. Oh yes. But the thing that struck me was that none of the ideas involved an ambition to be a better bookseller. And there was no mention of writers. (Hey, come on now. Be reasonable.)

At which point I scratched my befuddled head and said to myself, how did that massive company (worldwide in 2006: 1200 stores, 35,000 employees) get on in the next six years? Don't I remember that it sort of... collapsed?

Well, yes, turned out I did. By 2011 the company went bankrupt (in effect), couldn't find anyone to buy it, fell over, coughed, and went to a better place. Wikipedia:


As of October 14, 2011, the Borders.com website has been replaced by a redirection link to the Barnes & Noble website, effectively shutting down Borders.com entirely.

I gave notice a while back that I was going to publish a new Kindle book. Well, now it's out. The title is Daphne before She Died, and if you care to take a look at the details, you can find it, as appropriate, on either Amazon.com or Amazon.co.uk. 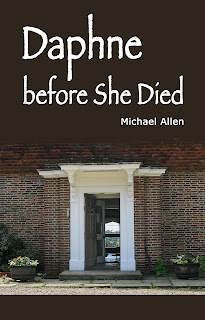 If you care to compare the two book pages, on .com and .co.uk, you will find that they're different. Why? Go figure. I will shortly write to Amazon and ask, but I am not hopeful of a reply.

Obviously, you're not likely to do such a weird thing as compare two pages for ordering the same book, unless you are, like me, a person wrestling with the task of trying to make your book visible and to boost sales (or indeed, create any sales at all, in the first place). But the .com page allows the author to enter far more detail about reviews, and about the author, than does .co.uk. Perhaps the explanation is that server space on .co.uk is in shorter supply? Odd.

During the past couple of months I have been spending a considerable amount of time studying internet book-marketing techniques. My conclusion, after more reading than I've enjoyed, is that the conventional wisdom is roughly as follows:

Write a really good book; design a terrific cover, and see if you can find someone famous to give you a quote for it; issue press releases; write to a vast number of people and ask them to review your book; start a blog, and post daily; get a Facebook page for yourself and one for the book; start twittering; get yourself interviewed on other blogs; interact with all those readers who review, comment or contact you for any reason; talk to them; find out what they like and don’t like; show them drafts of your next book; assemble a database of all the people you’ve contacted, and keep in touch with them for future books; send them a regular newsletter. Make friends with your readers! It’s all about interaction!

Well, yes. Maybe. But my conclusion, after absorbing a couple of months of this kind of thing, was that, if this is what it takes to be a great success as a writer in the digital age, then I am going to have to settle for being a modest success, or even no success at all. There is simply no way, at age 73, that I am going to take on that kind of workload. I would never have time to do any writing. 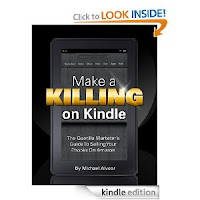 Fortunately, within the last week or two, I have stumbled across a different approach. It's embodied in a new book by Michael Alvear: Make a Killing On Kindle. Alvear's subtitle (inside the book) is: Without Blogging, Facebook and Twitter.

Notice that word without. Now this really looks promising. I will let you know how I get on.

Oh, and by the way: if you'd like a free review copy of Daphne, please send me an email. Address in the Blogger profile. This offer holds good till the end of July, but by then the book should be anyway offered free (under Kindle Select procedures) for a period of about three days.