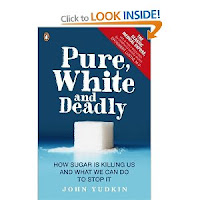 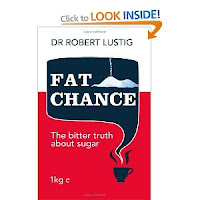 If by any chance you haven't yet realised what pernicious stuff sugar is, and how determinedly it is forced upon us in almost everything, then Lustig's new book is the one to go for. Those of us who've been paying any attention to food in the last 40 years probably won't learn a lot that's new -- except of course that we shall be given a host of new examples of how little the food companies care about their customers' health, and how committed they are to making profit no matter what.
Posted by Michael Allen at 10:17 am

While Dr Lustig's theories and evidence may seem convincing to the general public and reporters, the real test is how well he performs with his fellow scientists!

He was certainly called out for overstating the evidence and poorly extrapolating rat research at a conference he spoke at earlier in the year - check out the Q and A video in the attached article by David Despain (as well as the other lectures)!

What research shows that it is fructose that causes addiction? At the Q and A at the Sugar Symposium, Dr Lustig was called out on this and one researcher showed that rats liked glucose based carbohydrates over sucrose, and another questioned the applicability of rat research to be extrapolated to humans!

Also a recent rat studied suggests that it might be the sweet taste and NOT the fructose (as they used an artificial sweetener) although the article title gets it wrong also!
http://www.health.msn.co.nz/healthnews/8582942/sugar-as-addictive-as-cocaine-nicotine

The major issue with Dr Lustig's theory is looking at US Sugar intake over history - levels were still high in the early 20th century - so saying it is sugar is either an oversimplification or there is a threshold value that we have recently crossed. Methinks that it is a perfect storm of more sugar and less burning it up with physical activity!

Wouldn't it be great if there was a law that meant that every time someone makes a comment on a blog, they had to disclose if they were being paid by a commercial company to make such comments. More and more companies are employing people to pose as members of the public and tell blatent lies on the internet in order to protect the company's profit margins - but it's a good job these mercenaries are easy to spot!

I should stop drinking Coke i guess, but spending hours infront of the computer to finish a clients web site eats a lot of power. So sometimes you need some sugar intus. But thanks for the article

As much as an Affordable Term Papers is a summary of other works that should not be an excuse to many Pre Written Research Paper with plagiarized work. They ensure that the arguments are presented in a discussion and reflective manner to maintain the aspect of originality as well as show the audience that they understand what they are presenting on the Buy Pre Written Essays.

Just admiring your work and wondering how you managed this blog so well. It’s so remarkable that I can't afford to not go through this valuable information whenever I surf the internet! Important and famous people from throughout history born on this day. Search thousands of historical, noteworthy and Celebrity birthdays in our archives.

Complete Your Assignment From