How to write a short story (that works) 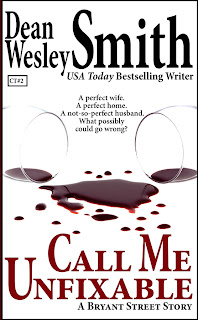 Dean Wesley Smith is as experienced a writer as you are ever likely to come across. In his post of 23 August, he describes how he went about writing and publishing a short story; publishing, that is, both electronically and in a paper edition. Total time involved: 10 hours, spread over a few days.

So it can be done. And his work does sell, regardless of whether you and I like it or whatever.

Note, however, that a number of skills are needed to pull this kind of thing off successfully. First, lots and lots of practice -- in his case, many years and millions of words. This develops facility, speed, and judgement as to what will work and what won't. Second, he did have a little help (a proofer and a good critic for a wife). Third, he has also developed enough graphic skills to do his own covers.

Personally I would be inclined to take a little more time. The total time would be about the same -- 3 hours per 1000 words is my usual average -- but I would put the story aside for a week or two before giving it a final polish. And perhaps allow another gap before the final check for typos. Then publish.

But, most importantly perhaps, I agree with Dean that once the story is finished you should leave it alone and get on with something else. Otherwise you will tinker for ever, to the advantage of neither the reader nor yourself.

At this point I will immodestly inform you that everything I know about the art and science of short-story writing is incorporated into my book How to Write a Short Story that Works. Search for the title in your local kindlestore and ye shall find.

Well, up to a point. I just did that myself, and found that there are in fact two editions of this book, at least on Amazon.co.uk.

What happened, you see, was this. Some years ago, maybe ten, I wrote How to with the intention of publishing it as a trade paperback, via my own company. But I never got around to getting it into print, a procedure which would, in any case, have resulted in just a few copies selling to UK libraries, and very few readers.

It so happens that I am old-fashioned enough to think that, if I go to the trouble of writing something, I want it to be read. By as many people as possible. So instead of going through all the hoops of issuing it as a trade paperback (it is, believe me, a time-consuming process) I stuck it up on Scribd, as a free download. I issued it under a Creative Commons licence (attribution licence 3.0 to be precise), so that it could be freely copied, sent to friends, and so forth. It seems that I may have posted it on other free sites as well, such as oboko.com.

And now, some years later, some enterprising soul has posted my first (oboko) edition of How to as a paid-for edition on Kindle. And any royalties received from sales of that edition will go to him or her.

This is, to say the least, a surprise. I did not think that the Creative Commons licence allowed anyone to do that. But it may be an arguable point. In any case, my discovery is not an unpleasant surprise. It is slightly flattering that anyone should take the trouble. And he or she is not going to get rich.

Anyway, to go back to the Scribd et cetera version. After a few years I noticed that the Scribd freebie had had 27,000 downloads, so I thought, Gee, if 27,000 people think it's worth a look at the free version, maybe a few thousand will pay for it. So I revised the book (and a lot can change in ten years, particularly on the marketing side). And in 2011 I took down the Scribd version put the second edition on sale on Kindle and Smashwords.

Should you be interested, my latest version of How to Write a Short Story that Works looks like this: 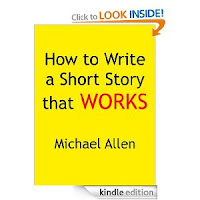 Buy anything else and you will get an earlier (out of date in some respects) edition, and the royalty will go to someone other than the author. Also, in coverting it from an oboko.com freebie, our friendly neighbourhood entrepreneur has failed to format the thing properly. It's a bit of a mess.

Posted by Michael Allen at 2:34 pm

It was another which was almost considered to be important there also the various principles and ideas discuss in this article also describing every facts to it. rap ghostwriters for hire

Thank you for sharing the useful information.
Essay Writing Service

Find out today ‘s Celebrity birthdays and discover who shares your birthday. We make it simple and entertaining to learn about celebrities.