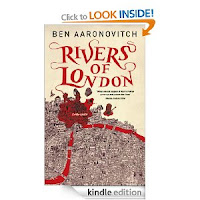 A while back, I somehow became aware of a novel called Rivers of London, by one Ben Aaronovitch. Genre-wise, it's a curious cross between crime and fantasy, and I couldn't help smiling. It's not so many years ago that I pitched a top editor with an idea for a novel which was a cross between two genres, only to be told that it would never work. So much for wisdom and experience, eh? Nowadays I wouldn't have to give a shit what a top man thought, I would just do it myself, but then...

Anyway, I read Rivers of London with great enjoyment. It stretches the old credulity somewhat, in places, but never mind, I thought, give the man a chance, first book in a proposed series, and so on.

That was in early 2011, it seems, and since then Mr A has produced two more: Moon Over Soho and Whispers Under Ground. This man really knows his London, and if you don't, you may find it a little confusing. But all three novels are excellent if you are looking for a crime fiction/fantasy hybrid, with lots of magic, ancient geographical features personified into gods and goddesses, and so forth. Some humour too, which never hurts.

Just in case you get confused: the first book seems to be called Midnight Riot in the US.

No doubt there will be more.

Thanks for sharing valuable information, I really very impressed on your blog. I hope you continue on a blogging job.
Entrepreneurship Assignment Help