Marek Krajewski and the city of Breslau

Don't know about you, but I'm not exactly short of books to read, so I don't often need to go searching for something new. However, I do keep my eyes open, and occasionally the Saturday edition of the Times (London) runs a column on new crime books. Also, occasionally, science fiction. But I don't think it ever stoops so low as to list new romances.

Anyway, couple of months ago the Times made mention of a new crime novel by Marek Krajewski. Sounded intriguing, so I looked him up.

Krajewski is a former academic who taught at the University of Wroclaw, which is now in Poland. And until 1945 Wroclaw was known as Breslau, and it was part of Germany.

If you live in the eastern part of England, you will have learnt that there is nothing between the east coast and the Urals. Nothing, that is, that would stop or slow down the Russian winter wind. Of course, the wind is not really cold by the time it gets to England. Not cold by Arctic standards. But by God it's pretty bloody chilly by English standards. And the point is, you see, there's just a big flat northern European plain until you get to the Urals.

What that means is that there are no natural boundaries. Hence lots of wars over territory. Hence cities changing hands and names. There are only a few rivers to divide the plain up a bit: Vistula, Oder, Elbe, Weser, Rhine. And although they are pretty big rivers they're not big enough to be much of an obstacle to a determined army. So Poland, for instance, has tended either to be very strong and big (1611, my memory tells me, was the biggest it got, but I may be misremembering), or it has been small and weak.

All of which is a bit of background. What you need to know, relative to Marek Krajewski, is that in the 1920s and 1930s, one particular city was known as Breslau, and was part of Germany, and now it's called Wroclaw and it's in Poland. In 2016, should you care, it's going to be the European City of Culture.

So, it is in his home town of Breslau, in the 1920s and thereafter, that Marek Krajewski has chosen to set his series of crime novels. There are four of them so far, and I understand that there will be a fifth. They are translated from Polish, and the UK publisher is MacLehose, part of Quercus. The UK publisher has given several of the books a striking set of covers by Andrzej Klimowski. 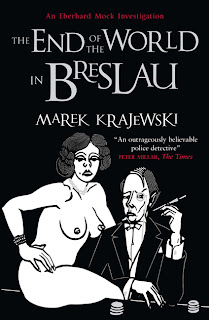 Krajewski's lead character, and series detective, is Eberhard Mock, head of the police, and a complicated fellow indeed. Drinks too much, beats his wife Sophie, and so on. He walks (or, more often, gets driven down) the mean streets, which seem to be lined with brothels, casinos where women have to serve as sex slaves to pay off debts (one of said slaves being, at one point, the unhappy Sophie), and so forth. The place is thick with Nazis, freemasons, debauched aristocrats, and all like that.

Question is, can I wholeheartedly recommend these books? Well, yes. Up to a point. I suspect that you need to be interested in the history of Europe in the twentieth century. You need to keep reading when part of you says surely there must be a more interesting book in my pile. But on the whole, it's a rewarding series. Perhaps, if it doesn't sound snobby, one could say that these books are for crime-fiction connoisseurs. I've read two so far, and intend to keep going.
Posted by Michael Allen at 7:22 pm

Lovely to see you back darling, even if it's taken me months to find out. I shall Twitter and Facebook.

I am glad to see you back...I had given you up for missing. In 2008 or 2009 i came across your blog, really liked it and what it said, added you to my favourites and then waited for new posts....they never came and now you surprised me. THAN YOU for blogging again!