SF and the amazing generosity of publishers

Perhaps it's just me, but I get the feeling that a great many novels these days have a touch of fantasy, science fiction, paranormal, and the like (see, for instance, the Rivers of London series). Either that, or they fall outright into one of those categories. 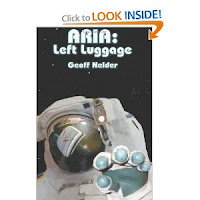 Anyway, news reaches me of a recent science-fiction novel by Geoff Nelder. Titled Aria, it comes with recommendations from such as Jon Courtenay Grimwood, who is no mean judge. It has also appealed, I see, to Gladys Hobson, who forever has a place in my heart as the fearless author of a book about a Granny in search of an orgasm.

Meanwhile, Harper Voyager, which is HarperCollins's science fiction and fantasy imprint, has announced that they will lower themselves sufficiently as to agree to consider 'complete and unagented' manuscripts for a period of two whole weeks. Galleycat has the story.

I must say that when I first read this announcement my lip curled and I was inclined to turn my head and spit. But then, gritting my teeth, I tried hard to understand their point of view. And, yes, I suppose it's just arguable that it is not cost effective for a publisher to wade through piles of unsolicited slush. But either do the job properly, for ****'s sake, or don't do it at all. Two weeks? What kind of impression does that give? To me, it says, arrogant, stupid bastards, frankly. Clearly, they don't expect to find anything. But just to show willing, just to show that their heart is in the right place.... Et cetera, et cetera. I don't happen to have a novel to offer them, but if I did I think I would write in and tell them where to shove it.

Perhaps I just got out of bed the wrong side.
Posted by Michael Allen at 10:16 am

Geoff_N said...
This comment has been removed by the author.
Thursday, 13 September, 2012

Thanks for the mention of ARIA, Michael. It has infectious amnesia as its unique selling point and premise. As far as I know nobody has used that idea before. No one is immune, you just have to keep away if you can. Great fun to research and write.
Incidentally, Angry Robot also ran a short unagented submission and were deluged with 900 scripts. They picked just ONE for further consideration. Tough world. I am priviledged that LL-Publications chose ARIA for this year.

I simply could not go away from your website prior to suggesting that I actually enjoyed the usual info an individual supply on your visitors? Is gonna be back steadily in order to investigate cross-check new posts.